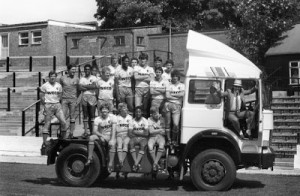 Here’s a challenge for you:

Can you name all the shirt sponsors Watford have ever had? You have to do it in two minutes or less?

Don’t cheat,  and when your two minutes are up you can look at the answers at the bottom of this post. ready? GO!! The first one on your list should have been – IVECO. Sponsors started to appear on football shirts in the 70’s. The first ever shirt sponsor was Jägermeister in 1973, wore by West German team Eintracht Braunschweig. Kettering Town were the first English team to have a go in 1976, but the FA threatened to fine them if they kept it. The FA changed their mind on the subject in June 1977 so clubs were free to have a logo on their shirt. However, it wasn’t until 1979 that Liverpool became the first Football League club to wear a sponsor. So why wait until 1982 for Watford to get a sponsor? In 1981-82 promotion season the club had been approached to carry a sponsor, but Graham Taylor was quoted to have said, “We’re not prepared to prostitute ours shirts”. It was probably a sentiment of many football traditionalist around that time, but even back then the commercial pressures were growing and clubs had to take on the lucrative sponsorship deals that only continued to grow and grow with the expansion of TV exposure.

IVECO are a commercial vehicle company that is part of the Fiat group and whose UK headquarters is above Watford Junction. Their locality was probably a large big part of the deal coming about. It was believed to be worth £400,000 and lasted for three season between 1982-1985. As pointed out to us by Lionel Birnie, author “Enjoy The Game. Watford Football Club, The Story of the Eighties”:

“You could take your replica shirt to the Hornet Shop and ask them to iron on the IVECO letters. The thing was, the letters were in one size and designed for the players’ shirts, so when they put them on my little nine year old’s shirt they completely swamped the front.”

A truck company isn’t a glamourous sponsor, but they were our first and the reason they are going into our Watford in 100 Objects list. They were the company name the Hornets wore during our first ever season in Division 1, on our only trips into Europe and in the 1984 FA Cup Final. Hey, maybe they were our lucky charm?

So, how did you get on in our challenge? Why not set it as a pre or post match pub challenge for your mates: