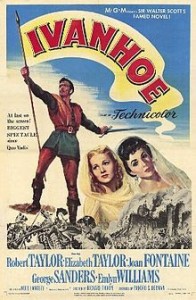 Every year I go canoeing with a bunch of mates. We paddle down the River Wye for the weekend and meander about 20 miles in 2 days. It’s pretty hard going, but we eat a lot of Wagon Wheels, drink plenty of beer and have lots of fun messing about on the river. At lunchtime on Saturday we stop off for food, and more beer, at the Hope and Anchor in Ross-on-Wye. In 2011 I decided to wear my Watford shirt and as walked through the pub to use the gents I heard a cry, “Oi Watford!”. The shout came from a slightly older fella who was enjoying lunch with his Watford supporting family.

As you do when you meet another Hornet you discuss the hot topic – Danny Graham’s transfer to Swansea at that point – I mentioned this list and he told me about how a Knight on horse back invaded the Vicarage Road back in 1952. The Knight was promoting the new Elizabeth Taylor film ‘Ivanhoe’. He told me that back then it cost exactly the same to go to the local cinema as it did to watch Watford play (how times have changed) and it had been a close decision that day as to which centre of entertainment he would go to. He chose Watford and enjoyed a very memorable piece of half time entertainment. He couldn’t remember who Watford were playing or what the result .

I’ve never seen the film, not even late night on a Sky Movies channel. IMDB handily gives us this synopsis:

Returning from the Crusades in the Holy Land, Ivanhoe learns that King Richard the Lionheart is imprisoned in Austria. Once in England, his pleas to pay the ransom fall on deaf ears as Prince John and cronies enjoy their current situation far too much. Joining forces with Robin of Locksley, Ivanhoe takes steps to raise the money all the while trying to re-establish his relationship with his father who disowned him years previously.

I think we can all agree it would be dramatic and action packed movie that deserves tracking down on DVD!

If you’ve got any memories of unusual people of things that made an appearance on the hallowed turf of Vicarage Road then drop us an email – podcast@fromtherookeryend.com. Now please forget this post as technically I have broken the first rule of Canoe Club – don’t talk about Canoe Club!