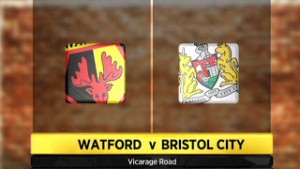 Well then. Bristol City. 2-2. It was all a bit weird really wasn’t it? Watford and their hastily assembled band of loanees and new signings showed glimpses of hat could be achieved under Zola and the new Pozzo regime, whilst also continuing to treat us to enough kamikaze defending to last us a lifetime. And there were some people saying Watford had lost heir identity…

The crowd was very quiet – a definite trend for the season thus far, and I think it’s because we’re in a state of flux. There isn’t really enough to get too excited about, whilst there is an underlying feeling (hope?) that the bad stuff will get sorted out – eventually. Personally I get the feeling that most Watford fans understand the situation we’re in, and whilst none of us would choose to go on a winless streak, we recognise that Rome wasn’t built in a day.

Personally I found it hard to sum up how I felt after yesterday’s game. Semi-deflated, I guess. But that’s just me – I wanted to know how my fellow Hornets supporters felt, so via the wonderful medium of Twitter, I asked Watford supporters to give me one positive and one negative from the Bristol City performance. There was a great response, and I have listed them below. We’d love to hear yours too, so feel free to add them in the comments box – it’s really interesting to guage thoughts at a time that is proving quite hard to get to grips with.

Over to the good folk of Twitter (Thanks to everyone for their replies!). Remember, the question was one positive, and one negative…

A wide range of views then, (why not give those that made them a follow on Twitter?) but we’d love to hear what yours were/are. Even better, how does Gianfranco Zola go about making the most of the positives and improving on the negatives? Let us know in the comments section below…

We recorded the new podcast at the game and you can hear it by clicking on one of the links in the top right of this page. It’s got John Barnes on it!