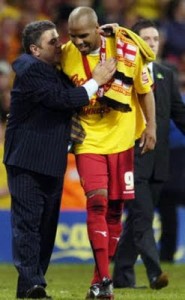 You might have heard Jimmy Russo’s interview with BBC 3 counties in the last few days. If not then have a listen below.

I hope Russo keeps up this open and direct approach to the media and therefore the Watford fans. Being a Chairman or Chief Executive of a football club must mean making decisions everyday that will annoy at least a few fans. However, as most don’t really talk to their fans about the club’s true situation as Russo has then fans and media just start to speculate.

When he talks to fans as he does in this interview he is taking away the ability of angry vocal fans to rant on phone-ins or bitch on a internet forum. If he does ends up selling Tommy Smith in this transfer window at least we all know why he is doing it and that it is for the good of the club. I for one will know his heart has the best intentions.