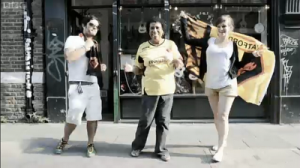 (These are the Watford fans in the Football League titles… do you know them, and are they real Watford fans?)

Tomorrow is going to be the first game of the season we won’t be going along to support the boys. We’re all massive Watford fans but don’t go to every single game. So it’ll be a Saturday afternoon spent trying to keep up with what is going on with Malky and the Boys. I know for men up and down the country it’s a battle to keep checking their phones or keep one ear on the radio in between “yes dear you look lovely in that dress”.
As many of you will be in the same boat I thought I would run down a few ways you can follow what is going on at Bramell Lane and on away games all this season.
BBC Radio Last season BBC 3 Counties only did live match commentary of Watford away games. Great but they were pretty much all onto AM which isn’t the easiest to pick. This season we’re being promised every live match commentary of every home and away game on FM. I’ve not listen to Jon Marks and Neil Prices commentary before and having produced football coverage on radio for the last few seasons it will be interesting to hear what they are like.

Watford Observer They offer minute-by-minute updates on the game, have a look in their Live Report Section. They also put up post match interviews, even get it sent straight to your iTunes, but they won’t be up till Monday. This is in their Audio Interview Section.
BBC On-Line There is live “text” commentary in the Watford section on the BBC Sports site as well as score updates along with every other game going on in the league. I think the strength of the BBC on-line coverage is post match with video highlights and audio interview.
BBC TV “Football League Show” is on at 11:20 after the return of Match of The Day (10:00). Highlights from a few games and all the goals from all three divisions. If you’ve had too many beers then you can watch it on the iPlayer and on repeat on the red button till midday Sunday.
I’ll be trying them all out this weekend to see what works… if you do then tell us what you think of the coverage.