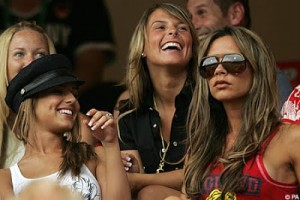 A fellow Watford FC blogger Rookery Mike posted his thoughts on the Tommy Smith transfer saga that has been hanging over our heads for most of the summer. I got to feeling like I was breaking up with a girlfriend. Then I thought about relationships we fans have with our footballers, managers and Chairman and how they’re very much like the one we have with our real life girlfriends.

The relationships are often great to begin well and we put up with some of the little problems early on. We have good times and it’s bad times and some of those little problems can develop into bigger ones. But whatever happens when we are together we are loyal to one another, most of the time.

One of those girls who will organise everything so you don’t have to do much. There are occasions when you’d want to take over and organise things, but they just won’t have it. With girls like this all you can really ask for is for them to tell you truthfully what is going on and what they are doing. At least make you think that you are part the relationship and so you feel secure in what they are doing.

Last week I blogged about Russo’s interview with BBC 3 Counties Radio and how I think his openness is helping fans like me and Rookery Mike to have an attitude of ‘acceptance’ in our current financial situation. This relationship will continue to be a good one as long as he tells us what is going on.

As a girlfriend Brendan was the first one after a break up with a long term girlfriend. He had his heart elsewhere and he came into a situation that wasn’t great and was rocky from the start. What hurt the most was the lies. At least what as Watford fans we perceive as lies. He passes messages to us through a mouthy friend (the media). He’d say one thing, do something else. Brendan all we wanted from you was the truth, good or bad. It was a short relationship that ended very badly and when we see her out on the town next time we won’t be pleasant to one another.

Man could Tamas be an amazing girlfriend. Some real wow moments and feelings of absolute jubilation. But he was a girlfriend who always wanted to more, and there is nothing wrong with that. We both knew that if things kept going it could get ugly and we knew we had fun while it lasted. Tamas didn’t go around talking to mouthy friends about us. It just would have been nice if you weren’t so obvious with the desire to get a new boyfriend.

We both know that it’s time for things to end. It’s been a blast and this break up will be for the better for both of us. We’ve acted decently to each over the last few months of the relationship. We’ve cheered his name, he’s continued to play hard on the pitch and not discuss our relationship with that mouthy friend. Tommy will always have a place in our hearts and that’s why when we see him again we will wave and say hello.

I know in today’s world of football very few manager and players have close and deep ties with fans. They aren’t around long enough to become as loyal as we the fans are. All we ask for a truthful girlfriend and one that will act in a dignified way. Just be open with us and tell us what’s going on and how you’re feeling.

We’ll certainly tell you when things are going great and when aren’t going so well.