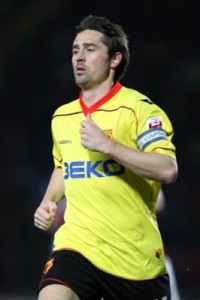 (He hits the ball and scores a goal, Tommy, Tommy Smith)

I left Vicarage Road both disappointed and satisfied all at the same time. It’s one of those weird feelings you can have as a football fan. Let’s get the disappointment out the way first. It came from the final score line – Watford 2-2 Blackpool. With Watford going a head twice in the game we gifted Blackpool their goals. They were never a ‘danger’ but Watford switched off for periods. Firstly when a corner that gave them the 1st goal and we didn’t close them down in the penalty area for their 2nd goal.

However, this disappointment seems to be short term and fixable. My satisfaction should be long term. I hope to see Watford play as well as they did, maybe even better. They deserved the win because, as Jason said in our Micro-podcast, we were looking like a team playing together for the first time. There was some fantastic movement and the number of opportunities in front of goal seems to have increased immensely from previous games. A few better placed balls and we’ll be scoring for fun… okay maybe not that well. I find nothing more pleasurable when watching football when a team are passing a ball around how they want. Watford were doing this with regularity on Saturday. Part of that has to be down to new loanee Tom Cleverly. On several occasions he was in the right place to distribute the ball and continue a move and give us more chances of goals. His other big role was as goal scorer when he scored his 2nd goal in two games.

It was good to read on the Watford FC site that like me Malky was optimistic after the performance and disappointed with how we gifted them two goals.

The other, and probably biggest, satisfaction of the day was seeing Tommy Smith score, what could be his final Watford goal. Not only did he score the first but he made the second. It was great to be able to give him one final sing.

This is better football from Watford. Malky seems to have sorted out his system and it’s starting to work on the pitch. The other feeling I left the match with was one of unsettlement. Tommy plays such a big part in Watford’s goals and I do wonder how we will play/change when he’s gone. The longer he stays the more we can get out of him, but the longer he does the Watford team of this season won’t have time to settle.