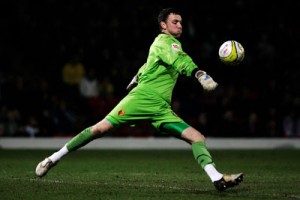 The next man to move on up from Watford look set to be Scott Loach. Spurs, Arsenal and Villa have all been rumoured to be interested in him and if they meet the $3million price tag I suspect he will be leaving in January. I was however very interested in reading Malky Mackay’s words on the subject:

“Scott will move to a big club, but I don’t want to lose him yet,”

“Another year here will do him a lot more good than sitting on a Premier League bench.”

I view Mackay as a motivating and developing manager. I imagine he’s the kind of guy that can get a young team up and ready to win. He’s not an ego and when he says words like this I believe him. I also agree with him 100% on Loach’s development. He is a fantastic shot stopper and can pull off a great saves that impresses a crowd. I do however have worries about his ability to command his penalty area on set plays and corners. I wince a little when the ball comes in and I’m thankful for the return of Jay Demerit to centre defence. He maybe first choice for England U21’s, but a little bit more time at Watford will mean he will overcome his current faults. That way he moves on he will walk straight into the starting line up of a Premier League club rather then just into contention and a possible career sat on Premier League benches.