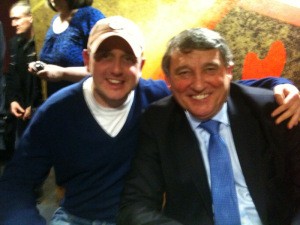 For a while back there it all seemed a bit dicey. A tax exile in Belize and two Chelsea supporting entrepreneurs were fighting a very public battle for control of my football club. As you will recall it wasn’t pretty, with claims, counterclaims and threats of administration bandied about all to freely. Even GT got a bit hot under the collar. Now I’ll be the first to accept that the bond between fan and football club has changed dramatically since I stood on the family terrace as a starry eyed kid, but never had I felt so detached and disheartened as I did during all that post AGM financial wrangling and brinkmanship.

Watford aren’t alone in being owned by those without a heartfelt interest, but the financially motivated unrest that is in evidence right across the footballing spectrum, from the splendour of Old Trafford to the blood and thunder of Roots Hall, didn’t make it any easier to stomach. This is Watford. A community club. Home of the family terrace. Home of the Junior Hornets. A safe and happy place. Or at least it was…

I’m starting to hope that those days might return.

Having attended the excellent Fans Forum at Vicarage Road last night, it is clear to me that whilst the club isn’t exactly in an enviable position, we’ve got a team of people in charge that are talented, focussed and above all passionate – and in this day and age, that counts for a lot.

I won’t be able to say much about Graham Taylor that hasn’t already been said, but seeing him in full flow last night was for a Watford fan, gratifying,

heart-warming, exciting and encouraging. A true joy. Graham was at pains to explain that becoming Chairman was never originally in his thoughts, and it was with an understandably weary air that he talked us through the events that led to him eventually taking the role. He also left us in no doubt as to the extent of his powers. “I’m not a saviour. I am not a saviour” he proclaimed. Who did he think he was kidding? To Watford fans, whatever happens, GT will always be god.

He was serious though. A lot of water has passed under the Vicarage Road bridge and even Graham Taylor can’t undo a lot of what’s happened. For example, we’re a PLC. If, as Lord Ashcroft desires, the club is sold, the major shareholders (Ashcroft, the Russo brothers and Graham Simpson) will decide who the buyer is. The Board will provide advice, but that is the extent of their influence.

The Board’s hands are tied when it comes to the East Stand too. It was clear last night that the Board share the fans appetite to begin the long overdue

development of what is nothing more than a dilapidated, dysfunctional mess. It was equally apparent that we haven’t got the money to do it, and without outside help and support we never will. Chief Executive Julian Winter wasn’t throwing in the towel though. Instead Watford are currently seeking “partners” who could help us develop the stand in return for access to the facilities. A simplified description, but you get the idea. You see this is where we should have been anyway, in Partnership. Watford FC gets a new stand; Watford the town gets a new facility. It isn’t rocket science…

Of course other topics were discussed and I have no doubtthese will be covered in greater detail elsewhere. Malky refused to be drawn on contract talks. He and Graham Taylor praised Birmingham City and Martin Taylor for their conduct during the successful completion of his transfer – Malky’s number one target during the transfer window. Graham Taylor made it clear that Elton John is not and will not be coming back as “the money man”. The panel discussed agents and the shady dealings that still go on, the success of our loan dealings and the interesting story surrounding the signing of “Footballs next star” runner up Connor Smith.

The thing I took away from the event was less tangible. It was a feeling. A feeling that at long last, Watford have worked out what has been going so terribly wrong and more importantly, a willingness and desire to start putting it right. There were no wildly optimistic promises, no suggestions of preparing for the Premiership. No nonsense. Instead there was a powerful undertaking to get Watford back on track. To put them back at the heart of the community and back into the hearts of fans who have had to watch from a distance as the club they love lurched from crisis to crisis.

In summing up at the end of the night, Stuart Timperley was quick to praise Malky Mackay, Julian Winter and Graham Taylor, all of whom are experiencing their roles as Manager, Chief Executive and Chairman for the first time. He described them as understanding the challenge and appreciating the Watford way. He described them as “Watford people”.

The club has been in trouble. Is in trouble. The financial strife is just the half of it though. Watford has lost its soul. I’m confident that if nothing else, Graham Taylor and his fellow “Watford people” can at least help us find that again.

Come on you Horns.