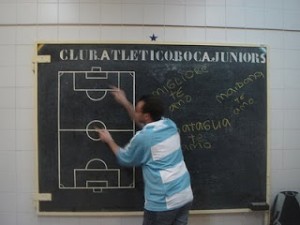 So Friday afternoon is normally the time of the week when I start wondering what the Watford line up will be come Saturday afternoon?

The thing is, we’re still 64 days away from the first game of the season and Malky has a long, LONG time to make changes to the squad and sort out a new signing or two. However, with the re-signing of Eustace, Bennett and Henderson this week plus the release of Demerit, Harley and Hoskins it got me thinking…

What if I was Makly Mackay and I had to pick a team for this Saturday. Who would I pick? Here is what I came up with…

So what do you think? Too young, too in experienced and is that such a big worry in a league like the Championship? How do you think it would do next season? And if you could only make ONE signing between now and the first day of the season what position would it be?

The Watford Squad of 2010-2011 won’t start to form properly until the team report back for pre-season training. Even then it could change before the closing of the transfer window at the end of August and then again when the loan signings start in September.

This is just some fun for a sunny June weekend. What are you thinking?