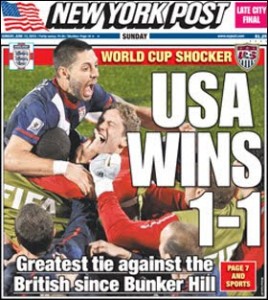 I’ve just watched Spain lose 1-0 to Switzerland. Instantly the pundits and news sites are calling it the first SHOCK of the World Cup. Last night we had a great game between Brazil and North Korea which, minus a fluke goal from Maicon, could have easily of been a draw and that game would have been called a “SHOCK” by the papers. Media blowing football results out of proportion is never going to go away and was made very clear by the New York Post – you can see it above.

For me there are two simple changes in football over the last 20 years that have contributed to this.

Firstly the fact that weekly action of top European Leagues are broadcast around the world. The USA manager has been watching Rooney and the rest of the team week in week out planning strategies. Secondly the top players from countries around the world are play alongside the top players from the “traditionally” successful International teams. These supposed lesser world teams haven’t necessarily turned up to this world cup and been better footballing sides, but they have come along and “done a job”. They’ve had a strategy to close down games and target the top players who they know inside and out from watching TV. I feel this has been a big contribution to the lack of goals  and slightly boring games in the opening 16 matches. Countries also might have one player who could be a game changer. Put those two together and gaining a win in the World Cup isn’t that much of a shock really is it?

Tonight South Africa take on Uruguay and the second round of group games start. Expect one or two more so called upsets between now and the final on July 11th.