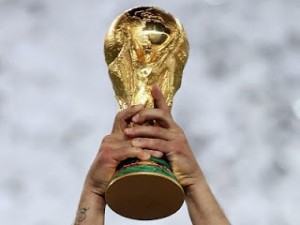 Brazil – out! Spain – out! France – well they’re rubbish anyway. But what an exciting end to the group stages of the Next Goal Wins World Cup. What’s that? Well it’s us following the world cup using the old playground rule of the Next/Last goal wins the game – no matter how many goals the other team scores. So what happened in round 1 of our slightly surreal world cup, England got the goal they needed to set up a 2nd round meeting with Germany after losing to USA and drawing with Algeria. Brazil got a solitary point with a 0-0 draw with Portugal, but went out after conceding a 79th minute goal against Ivory Coast and the shock of the first round when North Korea took 3 points off them with a 89th minute goal.  And hats off to the Italians! They got their tactics spot on for next goal wins football with a hundred percent record. And that extra time goal vs Slovakia gave them a win, not loss. They face Japan in the next round. As for Spain, well their unenthusiastic slow tempo passing game against Chile cost them dear as the Swiss grabbed the last knockout spot available.  Asamoah Gyan leads the way in the Golden Boot charts with 2. But the size of the chasing pack on 1 is increasing with every game. Can someone grab the initiative in the race to the top! So here is how the Round of 16 looks after

Check back later to find out the results from Round 2!

Oh and it looks like North Korean TV are ACTUALLY following the next goal wins method.