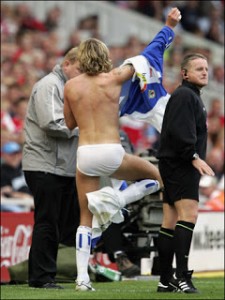 I’m not quite sure why I did it. I think I was a bit tipsy after spending a day at a birthday party with friends. The fact that it was a third birthday party had made the need for a few drinks more urgent, so when I got home in the early evening I was well on my way. Combine this with an exciting day’s golf at the Ryder Cup and yet another superb away win for Watford, it was fair to say I was feeling pretty happy with my lot. With my daughter asleep and my long suffering girlfriend tired of my incessant eulogising about the job Malky Mackay is doing, I had to find a different audience with which to share my sense of satisfaction.

After what felt like a rather rambling explanation of what I wanted to talk about with the BBC researcher, I was promised a call back. Aware I was a bit worse for wear and that after too much Peroni I probably sounded worse than I felt, I wasn’t holding my breath. Moments later however, the phone burst into life and I was told I’d be on air shortly.

I tried to get my thoughts into some sort of credible order but quickly realised it would be more fun if I just went with it and said what I felt. So, after saying hello to presenter Mark Chapman and co-host Robbie Savage, I launched into what grandly (and misguidedly) refer to as my address to the nation.

In short (it was anything but short – I rambled on for what felt like half an hour) the point I wanted to get across was that as a Watford fan, there is real pleasure to be gained from supporting a team that isn’t constantly going for glory and silver-wear. There is satisfaction to be gained from being a fan of a team who works hard on the pitch as well as off it, organising events for the local community and being accessible, open and honest with the fans. I wanted to make the point that not all football supporters are obsessed with the Champions League and multi-million pound signings and for many of us, supporting a well run, family and fan focussed club was something to be proud of.

To be honest, I’m not really sure what reaction I’d get. I certainly didn’t expect what I got.

After an initial “Mmmhmm” of approval from Chappers, in ploughed Robbie Savage, with this well crafted little nugget:

“I broke my leg at Vicarage Road and as I was stretchered off, all the fans were laughing”

Personally, I would have thought laughter would have been a more welcome sound than the aural delights he is normally greeted with at away grounds, but there you go. His statement was obvious poppycock. I was there and I didn’t laugh. I have to admit, I didn’t shed a tear either, but I certainly didn’t laugh. I don’t recall anyone near me laughing either. So Mr Savage, not all Watford fans found humour in your demise. You’d be lucky (should that be unlucky?) if you found more than a handful that did.

Apart from the obvious factual flaw in his crass statement, of greater concern was Savage’s complete inability to grasp the point I was making. He immediately made the connection between Watford and his injury and from that moment forth used it as a chance to talk about himself. Again. There was fleeting recognition for Watford being well run, but he clearly felt that the nation would rather hear his personal and small minded opinions about Watford fans. It was pathetic.

Luckily it became clear that Chappers had experienced altogether more pleasing dealings with Watford and was quick to say so, readdressing the balance with altogether more constructive and relevant comment. Savage wasn’t having any of it though:

“That may be the case Mark, but I just don’t like Watford fans”

Thanks Robbie, I think we get it.

The frustrating part of it is that not all players have this self obsessed, short sighted and arrogant attitude. I’ve had the pleasure of meeting several Watford players and they have been pleasant, humorous, approachable and friendly. I’m sure there are hundreds of professionals who are equally agreeable (Ashley Cole being the obvious King of the exceptions) and just as able to speak eloquently on the wireless. So why stick with Savage?

Admittedly, Chappers does a good job of keeping him in check and his forceful rebukes often make good listening, but this isn’t enough to warrant his continued place on the show.

Robbie Savage has managed to earn a good living. I don’t begrudge him that. It’s not easy to become a professional footballer and he will have worked hard to achieve what he has. In my opinion he is now damaging the profession that has treated him so well. With his consistent ill thought out and self centred comments, he’s making footballers look daft.

In a way, his strange outburst helped illustrate my point further. The range of virtues possessed by Watford that originally prompted my call? Well, Robbie Savage is a shining example of the polar opposite.