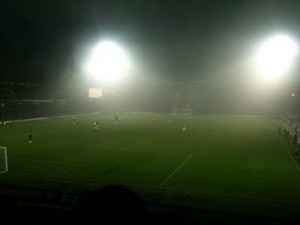 There are magical games and then there are games like Watford 4 Cardiff 1. Our home form this season hasn’t been great, and we know that we’ve had some fantastic away games at Millwall, QPR and Norwich. However, we’ve not seen anything as good as that at Vicarage Road. I say “we’ve seen”, but for most of the second half it was quite hard to see past the half way line because of fog. It was another great team performance and it almost feels bad to pick out individuals, however I must.

Will Buckley was dominant. He made the Cardiff left back Lee Naylor look like a conference player. He out paced him and frustrated to the point where his only tactic was to kick Buckley off the ball. And after getting a yellow card he was substituted – in the first half. You know it isn’t going to be a good day when you have to make a defensive substitution in the first half.

John Eustace was in complete control in midfield. Cardiff’s play maker Seyi Olofinjana, couldn’t get anything going. Super John was on top of everything and with some quick thinking and communication with Don Cowie he gave himself plenty of space easily head Watford’s 3rd goal from a Cowie corner.

And of course Danny Graham continues his fantastic goal scoring form. Yes, he missed a first half penalty, but he threw himself on the end of Will Buckley’s cross to score his and Watford’s first and when Watford were awarded a second penalty (again after a foul on Buckley) he ran to grab the ball so he could take the second Watford penalty of the day (we’ve not had one for two years and then get two in one game). Graham slotted it home with confidence. They were his 13th and 14th goals of the season equalling his goals total from last season.

Other notewortheies are Marvin Sordell who ran his socks off and scored Watford’s second, Lloyd Doyley who was combining well on the right with Buckley. In fact the whole back four were cool and calm when on the ball. They didn’t hoof it out, they controlled it, made the necessary pass to keep possession and build another attack.

I left the game on an enormous high. We have had great games this season, and this was by far our best home performance. Of course Malky and the boys have been working hard off the pitch to develop the on pitch product, but we do love a lucky charm on From The Rookery End. So what has been behind these amazing performances. Is it the fact that Millwall, QPR and Cardiff all have blue in their kit? OR is it down to Jason’s Lucky Watford Snowman – Xavier. Named after the whites man to ever play for Watford Xavier Gravelaine. Xavier has now watched the QPR game on the telly and Cardiff was his first game at Vicarage Road. He seems to have a magical ability to get a good performance out of the Watford players! If you are yet to listen to Podcast 7 then please do. We are really proud of our exclusive and extensive interview with Malky Mackay. It’s our little Christmas present from us to you.

Listen On-line: By pressing the play button at the top of the blog.
Download: Or you can download and subscribe to the podcast for free on iTunes.