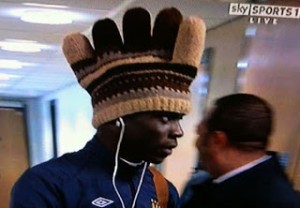 Mike Parkin of the ‘From the Rookery End’ podcast is no Gok Wan, Trinny or Susannah, but he’s pretty certain he knows what not to wear on the football pitch… Football has a chequered history when it comes to fashion, and that is being generous. Looking back over pictures from the last couple of decades, the mind boggles as to quite how grown men managed to conduct their professional lives in such a horrific range of uncomfortable, ill fitting, poorly designed clobber. However, we all know footballers don’t do things by halves and seemingly unsatisfied with having to wear a kit that looks like it could have been designed by a 4 year old with an etch-a-sketch, players have taken to adding to their match-day attire.

I knew we were in trouble when players started wearing coloured boots. I can’t quite remember when they started cropping up, but once they did, there was no stopping them. Red, white, green, blue, purple, gold – I even think I recall seeing Tamas Priskin wearing a pink pair once, not ideal when you are trying to hide from the linesman in an offside position for the 100th time in the same game…

An earlier indication of players losing the sartorial plot was the increase in players wearing gloves. I think my earliest memory of a gloved player was our very own John Barnes, so I am loathe to be too harsh and as Roy Keane correctly observed recently – ‘that boy could play’. However, it has to be said, I doubt that gloves are really necessary and when worn with a short sleeved football shirt, they look plain ridiculous. Yes Lloyd, I’m looking at you.

After the gloves came the tights. Yes, tights. The first player to wear them almost certainly came up with an excuse about them aiding a recovery from an injury, keeping muscles warmed up or some such claptrap, but nowadays they are slipped on without so much as a hint of embarrassment or self consciousness. In a Champions League game recently, even the officials felt it necessary to wear a pair. The pansies.

So, the best loved and most watched sport in the world now has players running round in pink boots, tights and gloves. Surely it couldn’t get any worse. Could it? Of course it could. One simple word and the questionable taste of an Arsenal player has taken football’s crimes against fashion to a whole new and unforgivable level. Ladies and gentlemen, I give you the snood.

For those of you blissfully unaware of the latest way footballers have found to make themselves look daft, a snood (I can’t even type the word without feeling embarrassed and slightly silly) is a sort of circular scarf that is worn round the neck, a bit like a big woolly polo mint. Presumably to protect the oh so delicate adams apple region from developing hypothermia. If it sounds ridiculous, it looks even worse and whilst I’m sure the players involved have signed lucrative sponsorship deals to sport these questionable garments, I wouldn’t wear one in the privacy of my own home if you paid me, let alone in front of the watching world.

I dearly hope that when Samir Nasri pulled on his snood for the first time in the Emirates dressing room, he was greeted with howls of derision and merciless mickey taking. I fear that it’s more likely he was asked where the rest of the squad could get one. If you are interested, I’m sure you can get them from the same shop that sold Emmanuel Eboue his white tights.

The only pleasing thing to come out of this worrying trend has been the swift action of our brave and fearless leader Malky Mackay. Clearly sharing my point of view, he quickly announced a ban on Watford players sporting snoods. Quite if a player would have risked the wrath of Sean Dyche by turning up in one, we shall never know…

Perhaps in snubbing snoods, Watford are living up to the ‘unfashionable’ tag that has seemingly been ours for so long. Well, we’re bucking other trends too. We’re nurturing talent instead of paying for it. We’re active in the local community instead of trying to flog shirts in Asia. We’re brave enough to not do what the others do and if that means we’re unfashionable, well that suits me just fine.