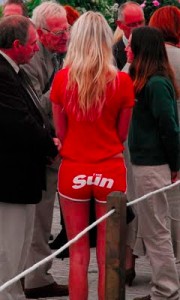 So our beloved Golden Boys have not long completed their home campaign, sporting the new kit for next season. As John Eustace led the boys out on Saturday, dressed in their new matchday fatigues, a common phrases was heard through out The Vic – “Oooooh Red Shorts!”

Personally I’m a black shorts man. Not sure why. I’m going to put it down to the kit from the 88-89 season. When I first started supporting the Hornets in 1980, they wore red shorts. And that was the way it stayed until that first season back in Division Two (that’s in old money folks). Now there were certain things in football that got me excited with anticipation. They still do, despite me being in my thirties! The F.A. Cup Third Round Draw, the release of the fixtures for the new season and of course, a new kit. Forget the thought of having to pay out another £40 some time over the summer for a new shirt, I want to know what gloriously yellow number I’ll be sporting every other Saturday in the Rookery End. Anyway, when I first saw that kit during the summer of 1988, there was a definite “Whoah” moment. Black shorts! This departure from the norm was not the Watford I was used to. It was a little bit daring, a break from the tradition I knew. A talking point for my WFC supporting friends and I. And I liked it. So that’s me – black shorts.

But what do the history books tell us. Well, the last time we were promoted to the Premier League, we wore red shorts. And the time before that. And the time before that. In fact every promotion that I’ve witnessed as a fan, and there’s been four of them, we’ve worn red shorts. So it’s got to be a good thing, right? Newton’s Third Law states that for very action there is an equal and opposite reaction. And likewise, for every football fan who has followed their team for a number of years and seen them promoted a few times, more often then not, you’ll have seen them relegated as well. That’s four times for me. And the shorts count? Three red, one black. So we could be pedantic and say that’s net one for the red’s, but that would just be, well, pedantic. However we did get to the FA Cup Final & to the UEFA Cup sporting red shorts as well. So history seems to favour it.

We could psycho-analyse it. What does red mean to you? Aggression, passion, fire? Sin, pain, danger? Many countries use red in their flag as a sign of courage. Three of the so called top four in the Premier League (okay, I’m being kind to Liverpool) wear red. And apparently research tells us that men find women wearing red more attractive. Not sure if that means anything in the context of WFC players wearing red shorts next season, but I now expect to see an increase in spending by the male population in the Hornet Shop on Christmas Eve!

And black? Strength, authority, power? Death, darkness, fear? The All Blacks wear it. Obviously! And they’re known as a dominant force in the rugby world. The Japanese see black as a symbol of nobility, age and experience. Hardly seems appropriate for our young squad! But does any of this mean anything? Do our opponents line up in the tunnel alongside our boys and look at their kit, their shorts even, and feel any sudden emotional or psychological change. Aidy Boothroyd will probably tell you they do. Graham Taylor will probably tell you you’re talking a load of cods-wallop.

I’ll leave the last word on the subject to the good people at the University of Munster in Germany. They showed videos of Taekwondo bouts to over 40 experienced referees and asked them to score them. In each bout, one competitor wore blue & one wore red. Then they replayed them with the images manipulated so that the colours worn by the competitors were swapped. The result? Those wearing red the second time round won 13% more bouts than before, with the scoring changing in the closer contests. So maybe, just maybe, in those tight games at Vicarage Road next season, we’ll get the odd extra free-kick, corner or even penalty that’ll be the difference between one point or three. And who knows where that will take us.

I still prefer black shorts though!