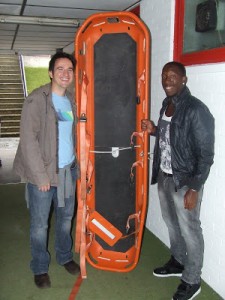 As football fans, the things we treasure most are our memories. Players and managers, even stadiums come and go, but we will always have our memories, and we wanted to come up with something that would allow us to share ours, whilst also hearing what other gems fellow fans can remember. That’s why we are launching our new project – Watford in 100 objects.

Watford in 100 objects is to bring together a list of one hundred different items, each providing an evocative memory or time in Watford’s history, but we need your help to do it! Here at FTRE we have our own objects that will be included, but what will make it special is hearing yours. The object can be absolutely anything as long as it is linked in some way to Watford Football Club.

To play a part, all you have to do is email details of your object (you don’t have to own it!), along with a brief description as to why you want it included to podcast@fromtherookeryend.com. We will be building the list as the season goes on, providing updates here on the website and on our monthly podcasts so if you want yours to be featured, email us today.

If you’ve heard the latest podcast you’ll know that we’ve announced the first entries to have made the list. Here is the first one in greater detail…

The name Pierre Issa probably doesn’t mean much to most football fans, but mention “The player who was tipped off a stretcher in front of the home end” and people start to take notice.

A South African defender, Issa signed for Watford from Olympique Marseille in September 2001, by then manager Luca Vialli. He played 15 games for the Hornets, scored only 1 goal and left the club the following June, so he was not a hugely significant player for the Hornets by any means. However, on Wednesday 26 September 2001, he played a part in an incident that would kick-start the career of a bona fide Watford legend and changed the course of Watford history forever…

25 minutes into a 3-3 draw with Birmingham City Pierre Issa was defending down the Watford left. In a perfect example of the sort of defensive qualities displayed by Watford defenders through the years, Issa tripped and fell awkwardly. Unfortunately, the fall was a bad one, and resulted in a serious shoulder injury. The defender had to be stretchered off. Sadly for our South African friend, his injury was to prove to be the least of his worries.

For a while, everything was fine. The stretcher bearers carefully strode round the edge of the Vicarage Road turf, the crowd obliging with a round of applause for their stricken hero. Then – disaster. As the stretcher was carried past the Rookery End, one of the medics slipped and fell, dropping the stretcher in the process. An already distressed Issa was dumped unceremoniously on the turf.

If you can stand it, watch the incident below:

Whilst this hilarious/unbelievable/unforgettable moment certainly isn’t a highlight of Piere Issa’s career, a fresh faced 18 year old has cause to remember it with great fondness. The substitute that replaced the luckless Issa that fateful night? Ladies and Gentlemen, I give you Lloyd Doyley.

It is therefore with great pleasure and no little emotion that we proudly announce Pierre Issa’s stretcher as the first entrant into the Watford in 100 objects roll of honour.

Of course, Lloyd is now an established Hornet and this year is his testimonial season. We talked to him about his personal highs and lows in Pod 2.1 – which is now available iTunes. We asked him about his memories of Issa’s infamous stretcher and he was good enough to pose for the above photo with Jon. Who knows where any of us would be today without that stretcher…

Pierre Issa left Watford in June 2002 and went on to play in Beirut, Greece and Crete. Since retiring from the game he has set up a company providing studded footwear for professional stretcher bearers*.