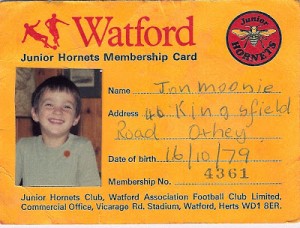 It was first game of the 86-87 season, the first game the Rous Stand was officially open and my first EVER Watford game. It’s the day I think of as the day I became a Watford fan. I stood, mainly on tip-toes, in the far left of the Vicarage Road terrace and just about saw Barnes, Blissett and Bardsley put three goals in the back of the net. When those 90 minutes were up I was hooked on football. I enjoyed every minute watching those yellow and white men run around the pitch, but was I a Hornet for life?

My Dad took me to the game, he wasn’t a Watford fan, he’d grown up in Scotland and the East End and no one in the family supported Watford. He just wanted to take his lad to watch a football match and Watford were the local club. After Oxford United he could have easily taken me to another club the following week and I could have ended up supporting any number of clubs. I believe the reason Watford FC is now my blood is The Junior Hornets and the object I want to put into the Watford in 100 Objects list is my Junior Hornet Membership Card. The Junior Hornets were a club for Watford fans under 16 years old. In 1986 it cost £4.00 to join and you got a club handbook, fixture/team poster, fixture card, updated history of the club, a Hornet Shop price list, a programme from a recent game, a Junior Hornet sticker and Watford car sticker. I don’t remember all that, it is the programme from Watford v Oxford which I still have. You also got the membership card and an enamel badge. I lost my badge many years ago, but whilst researching this post I found one on eBay and had to buy it.

A lady called Ann Swanson ran the Junior Hornets. Ann was the “Family Areas co-ordinator” and was in charge of the Family Enclosure and Family Terrace. She was a warm and loving person, who at the same time kept the Family area in check with a fierce no nonsense attitude. It was her part of the ground! I have many memories of being a Junior Hornet. There were Junior Hornet Club Nights held in the East Stand function room where players would answer questions and sign autographs. At the same time the Dads where downstairs drinking. I have a very early memory of David James (then in the youth team) standing the other side of a table to me, leaning over, picking me up, pulling me up to his face and growling at me before putting me down. It was the most amazing moment in my life – I was 6. We got to train at Watford Leisure on the Astroturf on a Thursday night and on the weekend we got on a special junior hornets bus and went to away games. We played a match against other junior supporters clubs before heading to the game. I must have gone to every Watford game in the relegation season of 1987-88. We even went to Luton away when they had their plastic pitch and away fans weren’t allowed in. We were the only Watford fans. There were day trips to other grounds. On one trip back from Highbury we lost part of the Watford bus roof as it went under a low bridge.

The Junior Hornets may not be around anymore, but the club still do amazing things for the kids to meet players and get excited about the club. The Trust has taken what the club did in the 80’s to a whole new level. However, if it wasn’t for my Junior Hornets membership card I probably wouldn’t have consumed so much Watford that I started to make a podcast about the club over 20 years later and I wouldn’t be celebrating my 25th Anniversary as a Watford fan in a few days.