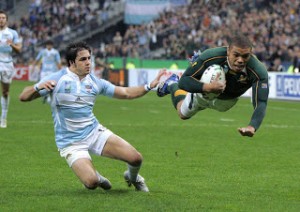 I’m one of those blokes who can watch any sport that comes on the TV. As long as I have an idea of how a team can win a game I’ll sit and watch it. Baseball, American Football even Kabadi I will watch it. I like to pick out the best things in a sport and imagine how they might improve my favourite sport – Football. Watching the Rugby World Cup these past few weekend mornings has been brilliant. How great is it to wake up and be able to watch world class sport? And there are many things I think Football should adopt from Rugby immediately, most are to do with the referees.

1) Clock STOPS during a gameIt could be a substitue or a injury, but when the game stops the clock stops in Rugby. If football did then we won’t get situations like we had on Saturday against Forest where players trotted off the pitch to time waste. In his post match interview with BBC 3CR Sean was very upset about the small amount of additional time given. In football 30 seconds is add to a game for every substitution no matter if they are 3 seconds of 40 seconds and the amount of time a ref adds is far too subjective at the moment.
Couldn’t one of the referee assistants not be in charge of the clock?

2) A Sin BinWhen debating how well a ref has done I often talk about how well he has controlled the teams. In the last year I’ve become a primary school teacher and classroom management has been high on the agenda. I liked it when the two yellow’s for a red card rule came into football, but on too many occasions I get a feeling that a ref isn’t giving a second yellow card because the first one might have been a little weak and sending off a player would change the game too much. Don’t even get me started on the lack of consistency in what gets you a yellow card.
I have 5 levels in my classroom and sending someone off (out of the classroom) is Level 5. At the moment ref’s only have 3 levels.
1) Verbal warning 2) Yellow Card 3) 2nd Yellow + Red Card
A sin bin would add another level and give many players time to calm down and consider their actions and what they need to do to not be sent off. Plus a sin bin penalises a team/players for just a few minutes and not for the rest of the game.

3) Blood replacementGot an injury? Well get off and get someone else on for a bit of time. I particularly like this idea as Watford could send on Rene Gilmartin for five minutes up front to throw his weight around and cause the defence some issues! I know it won’t happen as much football, but I still like the idea of weird subs coming on for a few minutes.

4) Losing/winning bonus pointsThere is part of me that thinks this is a weird thing in Rugby, but another part thinks it could give a fairer picture to how a game has gone. Why should Forest get the same points after beating us 1-0 this last Saturday as we got for beating Millwall 6-1 last season? And why should we continue to rub defeats in the face of unsuccessful teams just because they last by 1 goal?
So I’m suggesting…
4 points if a team wins by 3 or more goals 3 points for a win with a 1 or 2 goal advantage 2 points for a draw 1 point for a losing by just 1 goal
0 points for losing a game by 2 or more goals

Have a done the maths and figured out the exact impact of the league from this idea? No, but it’s fun to debate isn’t it?

Football is by far my favourite sport and I will argue till the end of time with anyone as to why. However, I’m not nieve to not know that it could still do with some improving.
Jon