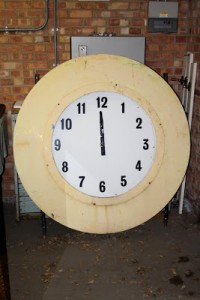 I have a very vivid memory of watching Watford games in the late 80’s. My Dad and I sat in the Family Enclosure with the Vicarage Road scoreboard to our right (that will be another object) and to my left a clock. The clock was in the middle of an advert.

As you can see in the photo the clock sat within the O of Observer and not a game went by without me looking at it to check the time. Yes the Vicarage Road end scoreboard told us how many minutes we’d played in the half, but it stopped at 45 minutes and back then the Linesman didn’t put up a board with the minutes of injury time. I used the Watford Observer Clock to tell me if the Ref was taking the mick or if we’d had kick off late! So why a clock to advertise the local rag? Back in the day there were two local papers to Watford and coverage of the club was a competitive edge both papers fighted for. Someone at the Watford Observer must have felt that a clock would make the difference and with the fact the Echo doesn’t exists anymore must prove the strategy worked. Rumour has it that if a player ever hit it on a match day they would have a forfeit at training.

It was an icon in the old stadium and it’s been on of the most suggested items in our Watford in 100 Objects list. It was an early suggestion from Richard Megroff. When he suggested it to I never thought we’d find it. Surely it was scrapped when the old Rookery End was taken down – it hadn’t. After a tip off from a supporter I got in contact with Sarah Preistly from Watford Museum. After a lovely chat about all the amazing Watford FC items she has there she told me that the Watford Observer clock is still alive, but not ticking. It’s been used in a few exhibitions at Watford Museum in the last few years, but isn’t on permanent display.  So a few weeks ago Mike, Jason and I went down to meet Sarah and after moving a few historic objects there she was – The Watford Observer Clock.

I can’t explain to you how excited I was about seeing the clock again and I hope I’m not the only Watford fan who’d get excited like a 7 year old meeting their hero. I guess to any other football fan, or any other human being, the Watford Observer Clock looks like a hunk of scrap metal that at one time used to tell the time. And in many ways they’d be right. This list is all about special objects that are only relevant to Watford fans. The Watford Observer Clock certainly is one of those items.