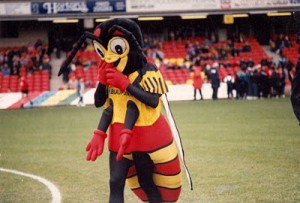 This weeks object is The Anatomically Correct Harry The Hornet Costume from the mid-90’s. Nick Young emailed us with the idea:

Can I recommend the Harry the Hornet costume as one of the 100 objects? Specifically, I mean the mid-90s one that had the tail-section (‘Harry’s arse’) and therefore actually looked like a hornet. Not the current one. Say what you like about mascots – I am not much of a fan if truth be told – but they have been a part of the footballing scene in this country for two decades now. And before being a wage-slave in a costume, Harry was a cartoon character in the programmes of the 80s, and can even claim direct descent from the mischievous-looking hornet who was the club badge before making way for the red hart/moose. So he’s part of the club’s history.

Harry first appeared “in real life” in 1995 and legend has it that the original Harry the Hornet costume that Nick wants to put in the list was changed because the man who first played Harry pleaded “squatters rights” when he had a fall out with the club. Apparently he stole the head. We never had a Harry the Hornet when I was a kid and in some ways I very jealous of the young supporters who get to see him today. I know in my very early games my Dad would have liked him to keep me distracted when my mind wondered away from the on-pitch action and I’d run out of Panda Pop and eaten my Mars Bar.

We have a few more ideas for Harry The Hornet objects to do into the list, but if you have an idea or an idea for another Waford object taht is important to you or the clubs history then please email us – podcast@fromtherookeryend.com ADDITIONAL:
Adam Cummings, former member of Radio Hornet, sent us the below email correcting the true age of Harry The Hornet:

Just like to take issue with you regarding the age of Harry. He was certainly out and about in the early 90’s during the final years of my time as Radio Hornet. There was one occasion at an open day when the normal Harry was still on holiday and my father somehow managed to put the costume on and use the skills he gained over 20 plus years in amateur dramatics in order not to disappoint the masses!

Thanks for the details Alan, we were wrong with the age, but the mid 90’s Harry is still the version we’re putting into the list