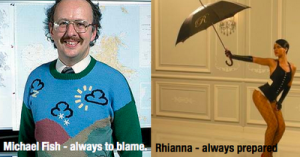 Mike Parkin of the ‘From the Rookery End’ podcast gives thanks for abnormally mild winter…
As we head towards December, meteorological experts are consistently telling us that we are set for one of the mildest winters on record. Bad news for polar bears and de-icer salesmen, but good news for us football fans, who spend much of the winter months traipsing up and down motorways to sit outdoors watching our beloved team in action. Not that it puts us off of course, quite the opposite in fact; attending football matches in abysmal weather conditions is seen as a badge of honour. A rite of passage. A means of sorting the men from the boys.
Often I’m a victim of my own poor planning – wearing just a school shirt to Oakwell on a cold Tuesday evening wasn’t one of my greatest moves. Sometimes though, no amount of planning or clothing can protect you from what the weather gods throw at you.
Take Torquay at home for example.

This January 1997 fixture was a game in the early stages of what was then known as the Auto Windscreens Shield. Only one stand was open – ironically the East Stand, and due to treacherous and unwelcoming conditions, the crowd was a low one. It was in danger of getting lower as the game wore on, with numerous spectators, myself included, feeling like death from hypothermia was a very real danger. As the game wore on, the pitch began to visibly freeze before our eyes; it was as if “Iceman” from the Fabulous Four comic had turned his attentions to the Vicarage Road turf. Oh what the assembled few would have done for a visit from his superhero companion “The Human Torch”.  It was cripplingly cold and the game should never have been played. It was though and I am one of only a couple of thousand to be able to say I was there. Worth risking limb loss to frostbite for? You betcha.

Fast forward almost a decade to 2006 and Watford were hosting Italian side Chievo in a pre-season friendly. Despite being summer, rain was forecast and older and wiser following Barnsley and Torquay, I arrived at The Vic with an umbrella proudly in tow. It was a good umbrella too, a silver, space age looking creation, given to me by a friend. It was a real one-off and I was quite proud of it. So proud in fact that I left it in the Hornets shop before the game. Realising my mistake halfway through the first half, I rushed back to the shop, only to be told by staff there had been nothing handed in. Oh well, I thought. It probably won’t rain anyway. An hour later and we were in the midst of a rainstorm the likes of which I had never seen before or since. I couldn’t believe it. Walking back to the car some 40 minutes away in such weather without an umbrella would be suicidal. My brother and I cowered in the Rookery until we realised the rain wasn’t going to stop and made a run for it. The Hornet shop had just closed as we ran past, it’s staff heading out into the rain just in front of us. Then, mere metres in front of me an employee put up an umbrella. A silver umbrella. My silver umbrella! Luckily for the chap in question, my anger at this outrageous and brazen theft was instantly outweighed by the relief of having some form of protection from the unrelenting rain, and without breaking stride I took back my brolly and strode off, leaving the young man wondering why he couldn’t have nicked a plain black one…

So, we’ve had ice. We’ve had rain. What are we missing? Ladies and Gentleman, I give you the FA Cup Third Round. I give you Scarborough away. I give you a 0-0 draw. I give you snow. No further comment required, I’m sure you agree.

Despite these dark memories, with three home wins on the bounce, things are looking increasingly sunny here at WD18 so let’s get behind the team this evening and make sure it’s our friends from Bristol that leave under a cloud.