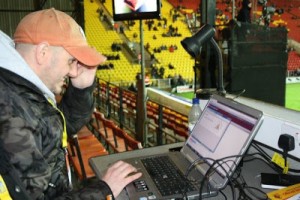 Scientists claim that Monday was the most depressing day of the year, (‘Blue Monday’ is the third
Monday in January) there is good news for Watford supporters as the latest edition of the fans
podcast ‘From the Rookery End’ is now available for download and will lift you out of the depth of depression. The bulk of the latest episode was recorded during Watford’s home game with Reading and in
a unique twist, saw the podcast hosts interacting with listeners during the recording. Podcast
presenter Jon Moonie explained:

“The Reading game was live on TV, so we knew there would be more people than normal watching
the game and we wanted them to be a part of the show. We posed questions via our website, Twitter
and Facebook and discussed the responses in the podcast. We were delighted with the number of
people that got involved and whilst the game was a disappointing one, our interactive experiment
was a definite success.”

“We asked the questions that we felt most fans will be talking about at the moment, for example
– who are you most worried about losing in the transfer market. In the light of some high profile
players returning to their clubs, we also asked who they would most like to see back at Vicarage
Road. Listeners came up with some great answers, which can all be heard in the show.”

The podcast also features an interview with Hornets striker Chris Iwelumo, a song for new singing
Nyron Nosworthy and a fascinating chat with the new Chair of the Watford FC Supporters Trust,
John Fawell. In talking about the interview with Mr Fawell, host Jon Moonie said:

“The Supporters Trust is a really important organisation who works hard to ensure the views of
Watford fans are represented. Like us, they have been keen to talk to Watford owner Laurence
Bassini about his plans for the club, and recently they managed to organise a meeting with him. John
was able to fill us in on what Mr. Bassini had to say, as well as explaining the way the Supporters
Trust works and what its aims as an organisation are. It was fascinating and ‘m sure listeners will
agree.”