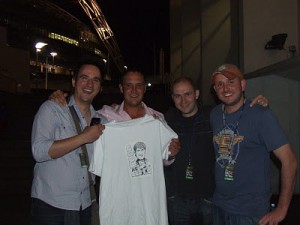 PODCAST: Hear our interview with Craig and the other Watford Legends – CLICK HERE

After a brief break to prepare for and then recover from all the Christmas and New Year festivities, we’re delighted to be able to bring you the next in the series of our ‘Watford in 100 objects’ list. This object, whilst never the height of fashion, should bring a smile to the faces of Watford fans of a certain age. Ladies and gentlemen, we bring you the limited edition, the unique, the original ‘Cool as Craig’ t-shirt.

21 February 1994. John Major was Prime Minister, East 17 were top of the charts with the unforgettable (unforgettably dire) ‘It’s Alright’ and ‘Forrest Gump’ was about to take the cinema-going public by storm. Elsewhere, somewhere in Hertfordshire, Craig Darren Ramage was signing for Watford.

Craig. Not a name that will have instantly given Watford fans cause for hope or great excitement, especially considering that under Glenn Roeder the Hornets were putting on some pretty average displays. A £90,000 signing from Derby, as I remember it there was no real fuss about the arrival of ‘Rambo’. That soon changed.Ramage made his debut in a game against Charlton and his performance left Watford fans exhilarated enthralled, but also exasperated as to how we’d landed such a skilful player for such a paltry fee. No matter, he was ours now and Ramage proceeded to delight the Vicarage Road faithful with his swaggering style of play, his ability to beat a man and his penchant for blatant showboating. After some fairly dire times at WD18, Craig Ramage was a breath of fresh air and largely thanks to him Watford finished seventh in his first season with the club.

If we’re honest, that’s as good as it got with Craig. Our hero returned from the summer break having clearly enjoyed himself a bit too much and he found himself out of the side at the start of the season. When he did force his way back into the side, it briefly looked like he was going to conjure up another memorable season , marking his return to the side with two goals and a memorable belly rubbing celebration. Many fans will also remember his ‘cigar smoking’ celebration when scoring away at Southend and despite the club getting relegated that year and Ramage departing for Bradford, he remained something of a cult hero. So much so in fact, that he was immortalised in a t-shirt, created by Dave Messenger, Matt Bentote and Stuart Brown from legendary fanzine ‘Clap Your Hands, Stamp Your Feet’. The t-shirt, featuring a Terry Challis cartoon depiction of Ramage, bore the slogan ‘As cool as Craig’ and like the player, was a hit amongst fans.  The slogan was a reference to the nonchalant way in which Ramage seemed to skip round defenders – he used to make the game look so easy (when he wanted to!) and it summed him up perfectly.

The fact that his flame burned so bright for what was a relatively short time means he is still fondly remembered and that his tribute t-shirt was a must have inclusion in our Top 100 list.We were lucky enough to meet Craig recently, when he turned out for Watford’s victorious London Masters side. I’m delighted to report that he is everything we hoped he would be. Confident, friendly, funny, and for those who saw him in action at Wembley last July will testify – still pretty good with a ball at his feet.

If only everyone was as cool as Craig.

PODCAST: Hear our interview with Craig and the other Watford Legends, Derrick Payne, Kevin Miller, Micah Hyde, Marcus Gayle, Steve Palmer and Tommy Mooney – CLICK HERE
Download the latest podcast via iTunes. Plus, get FTRE blog posts sent straight to your inbox. Simply enter your email address in the “Subscribe by Email” box in the right hand column near the top of this page. Or if you’re really technical you can use this RSS code.