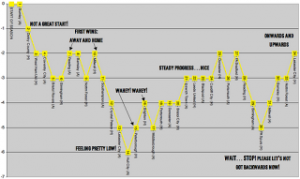 I was in the pub, chatting to a mate the other day. He asked me “How are Watford doing?”. I always find it hard to answer this. Yes, it’s easy to rattle through some recent results, however it’s hard to paint the full picture of my current mood as a Watford fan. Recent results do effect this, but there are many reasons, from many games that have resulted in my mood at any given point. I don’t have the time to say a thousand words to paint the picture I want… not after a couple of beers.

So… I had a go at painting a picture, well a graph. I call it my ‘Football Fan Mood Graph’.

Here’s how it works.

You’ll notice it’s a continuum and doesn’t distinguish between league or cup. My mood doesn’t change just because we won or lost in the cup – a win is a win and a lose is a lose.

Of course there are other ways I could present my mood. I could generate a win percentage (PCT) like american sports:

Of course I should also times that by 100 to get a percentage, but for some reason Americans don’t do it. And they don’t do draws and my positivity is definitely higher than 32% (Yes, I have timed it by 100 and rounded to 2 decimal places – it doesn’t take long Yanks!).

I could track the clubs league position throughout the season. The new BBC Sport website has some great new features and this is one of them:

Again this doesn’t reflect my mood as well as my ‘Football Fan Mood Graph’.

So here it is, my new invention, a ‘Football Fan Mood Graph’. Is it interesting and useful? Probably just for me!