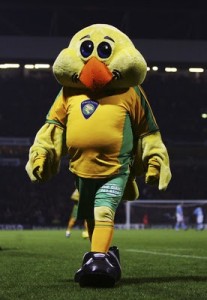 Lucky mascots and superstition are nothing new, it transpires.  In March 1907, Watford went down 2-0 at West Ham in the first division of the Southern League.  The defeat coincided with the death of a canary, “retrieved” as a mascot by captain Alf Hitch from a trip to Norwich earlier in the month; the unbeaten run since, which included a 3-0 win over league leaders Plymouth, had granted the canary “lucky charm” status.
The Watford Observer reported, “They had played with such extreme cleverness against the leaders and with so much pluck and dash that it was hoped the disadvantage of playing away from home seven days afterwards would not prevent them adding two more points to the tally, but it was not to be.  The canary was dead.”
Indeed, the impact of the canary’s death was arguably more decisive than its support in life, since the West Ham defeat preceded thumpings by QPR and Spurs (3-0 and 5-0 respectively) and a run of one win in fourteen.  A cynic might suggest that the sale of star striker Jack Foster to Sunderland the week after the West Ham game for a fee of £800 that smashed our record receipt may have been more significant a factor than the ex-canary; however since cynicism was only officially rendered lawful by the FA in 1953 we have no option but to accept the Observer’s version of events. The canary makes the list as symbolic of lucky charms before and since.

Thanks to Matt for writing this post for our list. Here his regular blogging on BHaPPY and his book Watford FC On This Day: Facts and Figures of every day of the Year.