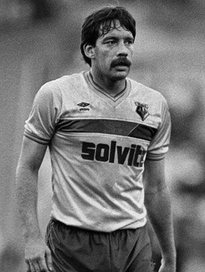 The winner of the best Watford FC moustache of all time was a massive debate at From The Rookery End. There have been so many in the history of the club that we had to include one in our list of Watford in 100 Objects. Thank you to everyone who sent us your suggestion; Jason has gone through them and put together a team of Watford players who rocked a ‘tache. So who made the team and why did we end up putting in Steve Sims’s moustache into the list?

I have a selection dilemma already. Three goalkeepers spring immediately to mind. Eric Steele, Steve Sherwood and Tony Coton. But I think I’ll plump for Steve Sherwood. The way he used to protect his ‘tache by saving with his legs wherever possible, was most admirable. The other two used to be more conventional and used their hands to protect the Hornets net, thus risking mud splatters and such entering the facial forest which couldn’t be good for it.

At centre back I’ve gone for the complementary pairing of the thick bushy ‘tache of Steve Sims and the slightly more trimmed Ian Bolton. In Podcast 2.7, when we inducted Steve Sims mustache into the Watford in 100 Objects list, we gave the deciding vote to former defender Steve Terry. Terry declared Sims moustache as the best at Watford FC due to the “thickness of it”. Steve revealed his namesake is now clean shaven and is “half the man without it”.

I’m opting for a 4-3-3 formation and in the midfield I am going to start with two gents of similar stature and hairstyle! Les Taylor, to this day, is the only man to captain a Watford side at the F.A.Cup final. Like you need reminding! The other curly haired midfielder to grace my XI with his hairy slug is Ray Train. I did consider Kevin Richardson for the midfield spot, but he was too wispy for my liking. Having said that, my third choice in midfield is Micah Hyde. He never wore anything full on under his nose, but this was the late nineties and his pencil ‘tache was a thing of style.

Up front, Luther also sported something akin to a pencil moustache back in the seventies, but there are three clear candidates for me. Gary Penrice didn’t get the nickname Porno for his acting qualities. That was a proper moustache. I was gutted when Jon told me he spotted him at Bristol Rovers earlier this season at the Carling Cup tie, minus face furniture. His partner up front is Gerry Armstrong. He always looked like he needed a haircut, yet the moustache was well manicured. Good on you Gerry! And Paul Wilkinson’s moustache was so prominent that it was constantly getting caught offside. In this XI, that’s a good thing! Worthy of a mention here (unusual for all time Watford XIs) is Devon White. He used to have a thin effort of a ‘tache that looked like he wanted to grow a modern handlebar, without having the balls to drop it below the lower lip. Nice try Devon, but not for the first time, not quite good enough.

We need a manager now don’t we. Well, goatees are not permitted in this line up, but this man certainly kept his moustache separate from his beard ensemble at some point during his WFC reign. And whilst he didn’t quite cut it as a manager at the second level of English football, he certainly cuts a dash style wise. So I look to Gianluca Vialli to lead our team. It’s quite a good looking line up, but even if they struggle, I’m sure we can rely on Steve Sherwood to pull off some blinding shaves!