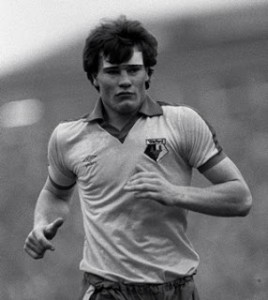 Football is full of icons – iconic players, iconic stadia, iconic kits, iconic commentary and every so often we see a player with an iconic look. Edgar Davids had his mask, Peta Cech has his hat, but many years ago Watford had an iconic piece of head gear.

Steve was one of the early graduates of Tom Wally’s youth team of the late 70’s and the 1980’s. He signed as an apprentice in 1979, playing centre defence, and broke into the first team under Graham Taylo as Watford rose through the Football League in the early 80’s. Steve ended up player 160 games as a hornet and netted 14 goals before he left for Hull City in 1988. We spoke to Steve in Podcast 2.7 back in February 2012 and he gave us his story behind the headband.

Firstly, it technically wasn’t a headband. Steve told us it was ‘Sony Grip Foam’ that he wore to protect 14 stitches that he picked up in a game against Norwich. The club brought him the ‘foam’ to protect the stitches so he could keep playing as it healed. However, with continued knocks (heading is a big part of being a centre defender) and his soft forehead tissue it didn’t heal enough. If it looked like it had sorted itself out and he didn’t wear it then low and behold he’d get a knock and the headband would be back on. He ended up wearing it constantly and even now if you see Steve at a game (he works for AP reporting on the games) you will see some light scaring on his forehead.

If there is another iconic Watford player that you would like to be represented in our list then please get in touch – podcast@fromtherookeyend.com and to hear our interview with Steve click here and scan through to about 29 minutes.