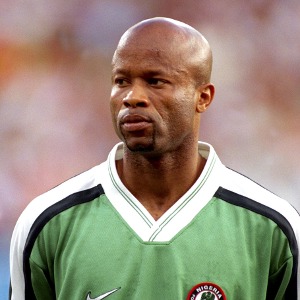 He played for Nigeria in two World Cups
But then he got bunions and had to give up
Ben Iroha, Be, Be Ben Iroha.

One of the all time greatest Watford chants and works in many of the important chant traits. It’s personal to one player, it includes several fact, it’s not abusive, it’s based on a classic song (Lola by the Kinks) and (at the time was) very topical.
So what circumstances encouraged the Watford faithful to put the World Cup and bunions into a chant about a Defender called Ben Iroha?
Well Ben arrived at Watford in December 1998 from Spanish side Elche CF and played just 10 games as a Hornet.

Surely someone who only played 10 games doesnt deserve a chant?

Watford fans didn’t let that get in the way of a comedy chant.

Why a world cup reference?

Because Ben started one game in both the World Cups in USA 1994 (Nigeria’s group match 3-0 win over Bulgaria) and France 1998 (Nigeria’s 1-3 group match lose against Paraguay) and was an unused sub for Nigeria’s other three games in each tournament. Nigeria won both their groups, finishing above Argentina in 1994 and Spain in 1998, but the Green Eagles didn’t get past their Round of 16 opponents.

And why the bunions? Unfortunately Ben had problems with bunions which kept him out of a long period of time and they finally forced him to retire in March 2000.After retiring Ben moved into coaching and worked in the US as youth department of FC Dallas, he was an assistant with the Nigerian U-17 team that won the 2007 U-17 World Cup and he was even head coach of Nigeria’s Dolphins FC. You can currently find him coaching at Heartland of Owerri in Southern Nigeria.