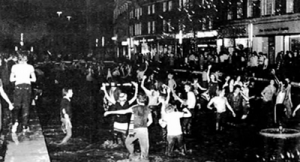 Fluids are always an important part of celebrating a big win and the water in the Pond on Watford’s Parade has been part of celebrations for many Watford fans after the club has gained promotion!

The history of the pond dates back to before 1800, and the Friends of Watford pond website tells use that it’s a “natural and unique Pond dates back to before the 1800’s. First used by the Victorians for watering horses and livestock brought to Watford’s Tuesday markets and later by troops during the Great War.” They have an interesting gallery of pictures of the pond through out it’s history.

From The Rookery End do not condone jumping in the pond. It will not only disrupt the animals and plants that live in it, but who knows what diseases you might pick up whilst in there! In fact it can get you into a bit of trouble with the police as they have been called to break up fights in the water, stop illegal fishing and prevent children playing on the ice in the last three years. However, with it being a site of much celebrations, as you can see in the photos below, how could we not put it into our list of objects that define Watford Football Club.