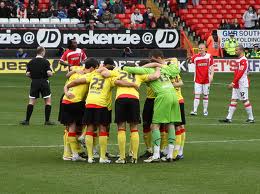 After Watford’s terrific win at Huddersfield at the weekend, Watford fan and regular FTRE contributor Kelly Somers had a few things she wanted to say. Well, what better place to talk about Watford than here at From the Rookery End, so do yourself a favour, get comfy and feast your eyes on Kelly’s current thoughts. If you’ve got an opinion, feel free to add it in the comments box below. These are interesting times at Watford and there is some great debate to be had. All feedback, opinion and interaction is appreciated. It’s what makes being a football fan fun.

Over to you Kelly…

Being ‘desperate’ for a win is a phrase somewhat overused in football these days, however on Saturday, for me, this was a place Watford were nearing to finding themselves. Not least because we were slipping down the table into unwanted relegation territory, being without a victory in over a month (it is of course ridiculous to be talking about the table at such an early stage but such is the nature of the game today), but also to prove a point. A victory at high flying Huddersfield following the hysteria stemming from Martin Samuel’s article in the Daily Mail earlier in the week, may just prove a point that myself and many other Watford fans have been trying to prove – that, contrary to the outsider’s opinion, we aren’t just an inflated squad of misfits with miss guided goals, but a united team in progression with a point to prove.