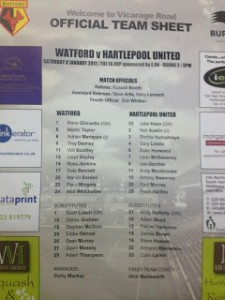 Lloyd Doyley has the record number of guest appearances on From The Rookery End – 5, followed by Martin Taylor and Nick Cox on 3. Whilst Nick was in charge of Watford’s Academy we had him on to tells us about how it all works on a few occasions. He was always a great guest to have on and when he left Watford, to take on Sheffield United’s Academy, we asked if there was an object that summed up his time at the club. He chose a team sheet from Watford Vs Hartlepool in the FA Cup on 8th Jan 2011.

Here is Nick’s reason why:

The team sheet is framed and hung on my office wall even now. The fixture it’s self probably wont go down in history as a classic but the game was the epitome of an era for the club and was a measure of what was a remarkable but relatively unnoticed achievement.

Following a period of turmoil that included relegation from the premier league, yet another close encounter with administration, huge debt and several changes in ownership the club had to come up with a bold plan to steady the ship.

That plan was to implement a strict playing wage structure and squad model, develop home grown players, scour the lower leagues for players that could be developed and sold and being meticulous about how ever penny was spent in every area of the club.

You would have thought that amidst such turmoil staff would have been unhappy but we had a plan, strong leadership and a focus. This was mainly thanks to Julian Winter who never really got the credit externally for the role he played in turning the clubs fortune around. It was actually a fun time to be involved with the club – in fact camaraderie amongst office staff around the time of the threat of administration was particularly special.

The Academy’s specific role in the plan was to strive to contribute 50% of all first team starts.

The football department as a whole was having to leave no stone unturned, taking care of the small details that create excellence and instil an incredible culture of learning and self improvement.

So what’s the significance of the team sheet?

The starting 11 that day consisted of 7 Academy graduates. The squad in total contained 11 graduates (not including Loach, although most other clubs would have classed him as a homegrown product). 9 of which had played in the same youth team together.

The rest of the squad were young hungry players usually plucked from smaller clubs in the hope they could be improved and become of value to us in order to fill the black hole – Deeney and Graham being perfect examples that day.

Goals came from 2 graduates in Sordell and Mingoia as well as Danny Graham.

For the Academy and me the game marked the most graduates on a pitch at any one time in recent history. A fantastic feeling. For the club is was a game that indicated the bold plan was coming together. It was a risky plan that perhaps only those inside the club fully appreciated. We had no right to achieve what we did with the resources available.

I’m not for a second suggesting the model we had back then was better or more appropriate than the clubs current business model. Both have their unique merits. In fact I’m making no comparisons at all. It’s just the way it was and it was great fun. Achieving against the odds. Beating the system.