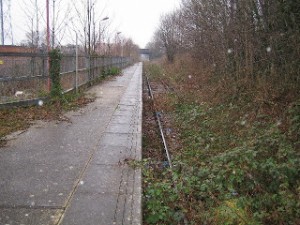 The 1982/83 season will undoubtedly be remembered by Watford fans as the Hornets’ historic first season in the top flight, but it also marked the opening of Watford Stadium Rail Station, a facility that opened in December 1982.

The station or ‘halt’ as it was known was built with a view to transporting away supporters directly to the stadium, hooliganism was a very real problem at this time, and it was felt trouble could be averted by stopping visiting supporters from heading to Vicarage Road via the town centre.

The halt was opened on December 4 for the visit of Manchester United  – and the Red Devils weren’t the only big names in town that day, with Watford Chairman Elton John performing the official opening. It will come as no surprise to learn that the first train rolled into the station five minutes late – this is the British railway system we’re talking about after all – but it wasn’t leaves on the line causing the delay this time, it was down to TV camera crews and excited fans scrambling for a few words or an autograph from the world famous Hornets chairman.

Over 25,000 supporters attended the fixture at Vicarage Road that afternoon and with only a tiny number of reports of disorder at a time when hooliganism and trouble was commonplace, the halt, which cost over £300,000 was declared an instant success.

The game itself was less pleasing for Watford, with a Norman Whiteside goal enough to seal an away win for Manchester United.

The station was only ever open on match-days and was eventually shut in 1996.

With a new Vicarage Road Stadium station due to open in 2016, twenty years after the closure of the old station, Watford supporters will be hoping that it will be welcoming the fans of Manchester United to WD18 once more.