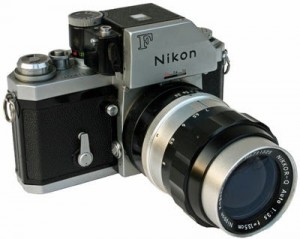 Alan Cozzi is a Watford Legend, but many Watford fans wouldn’t recognise him if he walked past them or they may not even know his name.What they will all have done is looked at a photograph he has taken. He sits at the side of the pitch at every Watford match and has has photographed every player and every major event since 1979. His first game was a bitterly cold away game at Colchester in 1979. Watford had been the only club to reply to a 19 year old boy wanting a break into football photography. It started there and he is still clicking his camera to this day. On that day he used a Nikon F camera and it is that camera that we are putting into our list of 100 Objects. Cozzi has used many cameras over the years, many rolls of film/memory cards, but this was his first.
So who was his favourite player to photograph in his time on the side lines? Alan told us, “John Barnes – just his sense of balance and movement and you could see that when you captured an image of him. You could see that he had something that other players didn’t have.”
And what about his least favourite? “Heidar Helguson was difficult to get a good photo of to begin with”, but as Alan explained, “once I understood his game he was easy to read. And that’s what you do. Different players at the club through out the years, you have to look at them playing their football first, then that gives you an idea of how to photograph them.”
If you saw a photo of Cozzi, you may not know it’s him, but every Watford fan knows his iconic photographs.