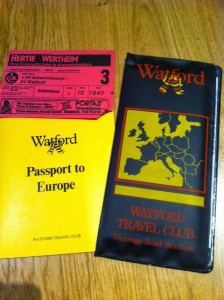 Watford’s rise through the footballing pyramid in the early 80’s was a thing that football fans dream of. It’s the sort of rise that will probably never happen again. Who gets promoted to the top division and in the first ever season at that level qualifies for Europe?

So when Watford made their first over seas visit for a UEFA Cup tie against FC Kaiserslautern, the supporters on the club coaches were give a special pack from the club – a Passport to Europe. Regular 100 Object contributor, Nick Dunsbury sent us these pictures of a wallet containing a map of Germany and a letter from Graham Taylor himself. Objects in this list can either represent a special moment in the clubs history or just symbolise your relationship with the club. Nick’s Passport to Europe does both.