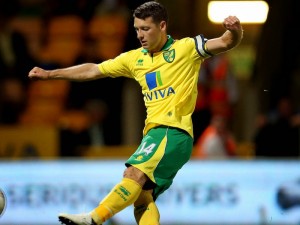 That was the glib response I received from a Norwich supporter after registering my disdain for Cameron Jerome’s theatrical tumble and subsequent demands for the dismissal of Watford’s Gabriella Angella. Jerome’s antics were as disgraceful as they were obvious, yet that was that response. Pot. Kettle. Black. No condemnation, just an attempted defence of the indefensible on the grounds that he wasn’t the only guilty party.

It’s perhaps even more depressing to realise that if Watford’s own Odion Ighalo had won a penalty for his embarrassing dive, many Hornets would choose to hold it up as “payback” or “justice” for Wes Hoolahan’s equally laughable defeat to gravity.

There’s a lot wrong with football, but most of it I can just about accept. I can tolerate the fact that it’s seemingly OK for a defender to shepherd the ball out of play for a goal kick, shielding the ball like a blocker from the NFL for 20 yards. Obstruction? Anywhere else on the pitch, of course, but nah, goal kick. The offside rule continues to be changed so frequently that it now ceases to achieve what is was brought in to do in the fist place, but hey. I can even accept that away strikers have the right to gesticulate and pull absurd faces in front of home supporters. Obviously in doing so they out themselves as odious little twerps, but if you give it out, you’ve got to expect a little bit back, right? I could go on, but you get the picture – football isn’t perfect, but we can live with it.

There’s one thing though, one part of the game that I have never been able to stomach. Until recently I thought everyone felt the same way, but recently I’ve sensed a shift in attitude. I’d always thought that diving was accepted, but done so through gritted teeth, the rough rule of thumb being that “these sort of things even themselves out over a season”. I think that’s changed. I think people are starting to actively defend diving. It’s starting to be seen as a legitimate part of the game and that can’t be allowed to happen.

Diving is started to be dressed up as something else, explained away and excused. Take Wayne Rooney at Preston. He dived. No contact, a perfectly executed tumble, penalty. Embarrassing. Or so I thought. After the game it was up to Roy Hodgson, Rooney’s England manager to pass comment. The replay was shown. Once. Twice. Three times. Sadly for Roy there wasn’t an angle that even hinted at the remotest of contact. Mr Hodgson’s conclusion? That Rooney was taking “evasive action” and was therefore entitled to hit the deck.

Up to a point, I agree. I’ve had to take evasive action myself before – a drunk cyclist, a book hurled by the Mrs, a punch to the unmentionables from my three year old; I’ve had to get out of harms way more times than I care to remember. The thing is though, I can never remember my evasive action ever looking like Wayne Rooney’s graceful fall to earth against Preston. Evasive action is hurried, quick, desperate, a mess.  It simply doesn’t look like what unfolded at Deepdale.

Some leapt to Hodgson’s defence. “You can’t expect him to criticise the England captain” was the common theme. In that case, what is he doing taking what was presumably a paid role to act as a pundit? If he can’t speak openly about what he sees, then his value is pretty limited. So, let’s give Hodgson the benefit of the doubt. He knew Rooney dived, he just couldn’t say it. “Evasive action” was his get out of jail free card. Nonsense, but just plausible enough to get him off the hook.I expected social media to be unforgiving. I expected him to be called out on it and in the main, he was. But there were supporters, there were people who bought it. People who actually  thought that Rooney was entitled to dive as otherwise he could have been fouled. There might have been contact. That’s the same as a striker wheeling away in celebration with the ball at his feet three yards out. No goal as yet, but he’ll probably score. That’s close enough, right?

Of course it isn’t. It’s nonsense. I’m hearing increasingly using contrived gobbledygook to defend the indefensible and it has to stop.The game is being ruined by cheating and it’s now so commonplace that supporters and pundits are starting to believe it’s OK. One-eyed fans refuse to condemn their own players, instead using examples of wrongdoing against them to justify their players’ indiscretions. Pundits hands are tied for fear of upsetting players they have to work with and all the while, referees are finding their job increasingly difficult, decent games are being ruined and genuine supporters are being shortchanged.

The worst thing about the whole sorry mess? It would be so easy to stamp out. In most instances, a simple understanding of the laws of physics should suffice. The official, when faced with deciding on what’s a dive and what’s not, should think back to the occasions when he or she has been tripped. A shoelace, a dog, ice. We’ve all done it, we’ve all been felled whilst in full flight. Of those tumbles, how many have been graceful examples; back arched, head tilted with arms outstretched? None. If you’re genuinely tripped, you fall a certain way. If you dive, you fall another. If you still aren’t sure,a cursory viewing of ‘You’ve Been Framed’ should suffice.

Some will get through the net of course, it’s not always easy to tell in the heat of battle. These could still be dealt with though. Wes Hoolahan dived to win a penalty. Odion Ighalo dived to try and win a penalty. Both clear in real time, irrefutable with the benefit of a replay. With this in mind, why can’t clear dives be punished after the event? Some will be too close to call, but many will be clear cut and should be punished. I’m yet to hear a sensible argument as to why this couldn’t be introduced. Maybe I’m missing something?

If a player has to dive to win, he’s admitting defeat. The professionals we pay to see don’t need to dive, they don’t need to cheat. They choose to and they should be made to stop. It’s ugly. It’s pathetic. It’s embarrassing. It’s inexcusable. Stop it.