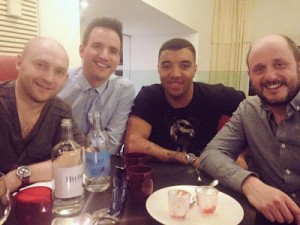 Thankfully, this year’s Championship Play-Off Final will only be significant to us for two reasons. Firstly, it will reveal who is joining is in the Premier League (that’s right, We are going up, say we are going up!) and secondly, it will mark five years to the day since we recorded the first ever edition of From The Rookery End.

It’s been quite a journey, with plenty of ups and downs – it feels like we’ve experienced more in those five years than supporters of other clubs enjoy/endure in a lifetime. It therefore felt fitting to mark the occasion with a special interview. A chat with someone whose Watford career has seen those same peaks and troughs. An in-depth Watford conversation with a player who has etched himself firmly into Vicarage Road folklore. Troy Deeney.

We were lucky enough to spend the evening with Troy, discussing his five years with Watford over dinner. No subject was off limits, and he was open, honest and engaging, happily talking us through his thoughts on colleagues past and present, his hopes for the future as well as dealing with the less positive moments that blighted the early parts of his Vicarage Road career. This is a special interview with a special player and we’re delighted to be able to bring it to you at this special time. Enjoy. #fornicforpromotion